Land restored: ‘FIDA takes up to the role of parents to orphans’

By law, children are the direct beneficiaries of their late parents. However, those who have been orphaned are often vulnerable to lose their inheritance to opportunistic relatives. FIDA (U) supported five siblings whose uncles deprived them of possession and enjoyment of the land left to them by their parents and ensured that the land was restored to them.

Gabriel Opio, his brother and his three sisters were left a piece of land in Kateleng village, Kaabong district which their late father passed to their mother before her death. The uncles of Gabriel and his sisters interfered with their possession of the land and prevented them from building or living on the land. The uncles justified their behavior by saying that they did not receive any dowry when Gabriel’s three sisters were married.

Gabriel had lost all hope to recover the land because he did not know the history of the land and was too young to know how it came to be possessed by his family. Gabriel nevertheless approached FIDA for help and a closed-door meeting was organised where all the parties could agree on a date to conduct a mediation.

FIDA advised Gabriel to get in touch with any relatives or older person who knew the history of the land and could testify on his behalf.

Just a few days after this successful mediation, another third party claimed ownership of the same piece of land and accused FIDA of illegally giving out the land without his knowledge and consent. This third party invited FIDA to a locus meeting in order for FIDA to explain the circumstances under which the land was given to Gabriel and his siblings. The community elders were also invited to this meeting and they testified that the land belonged to Gabriel’s father, who bequeathed it to his mother and that the five children where therefore entitled to the land following her death. They stated that the third party is not known in the history of the land. The third party, realizing that he was the only supporting his case, stormed out of the meeting as he lamented ‘since the people have said that the land is yours, take it. It is no longer mine.’

FIDA advised Gabriel and his siblings to never leave the land unoccupied and uncultivated as this opens a door to land grabbers to make a claim on it. Gabriel and his siblings have since planted sorghum, millet and beans on the land and have benefitted from a successful harvest. They have sold most of their produce but also kept some for their own consumption. They envision building rental houses and also starting a piggery on the land in future. On a recent follow-up visit, Gabriel expressed his gratitude to FIDA as follows: ‘There was no way I could get the land back before I approached FIDA. In my mind I thought I had nothing to do but give up and migrate to a different district. When your only family members who are supposed to defend you are the ones trying to take your land … FIDA takes up the role of parents for orphans.’ Jokingly, he also said that he planned to name his first child FIDA so as to remind him of the great service that the organisation had rendered to him.

FIDA hopes that this case will serve as an encouragement to vulnerable women and children in the district, not to give up when they face an injustice, but to approach FIDA for support. 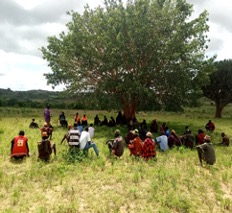 The first locus meeting called by FIDA and attended by Gabriel, his relatives and many community members

Previous FIDA supports widow to exercise property rights in the face of opposition Next Treating defilement as the heinous crime that it is: FIDA (U) supports Karenga community to take action