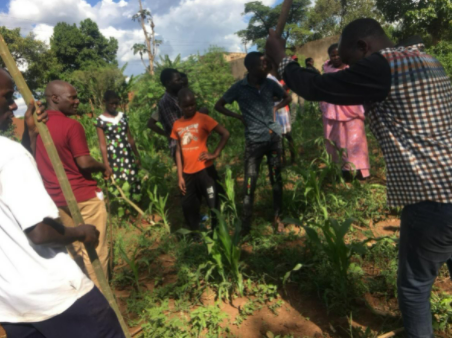 The respondent and other residents planting boundary marks
January 21, 2022 - In Success Stories By Fida admin 0

Issues relating to land inheritance is a common source of tension in Uganda with families being caught in disputes for extended periods. The case presented to FIDA by a young man who had lost his father was one example of this. The 19 year old Ugandan male was left without a family home following the death of his father as both him and his 15 year old sister had been chased away from their grandfather’s estate. Prior to the father’s death, both of the children had lived on the estate as their father had yet to build a home of his own. The siblings of the deceased worked to exclude the children from their rightful share and they had even been denied school fees by their late father’s siblings. After learning of the situation FIDA Uganda, with the support of IDLO and Sida, intervened in the matter and registered a file for the client, who was accompanied by a former Community Volunteer that was working with FIDA.

Considering that our client was a teenager who could not afford transport to come back to the office for a mediation meeting, we scheduled the matter for a locus visit at the convenience of our client and the Respondents as well. The locus visit was conducted on the 4th of May, 2021 in collaboration with the District Senior Probation and Social Welfare Officer, Kaliro District. During the locus visit, the administrator (Mr. Z) initially agreed to give our client a piece of land which is in a swampy area, however with our intervention and negotiations, the administrator agreed to give him a good piece of land along the road.

Boundary marks were placed and an agreement signed to that effect. Mr. Z also promised to help our client with construction by providing bricks and iron sheets. In cases relating to youth, there is a need for counselling for them to understand that while they claim their rights, they have responsibilities to listen and to respect their elders in all situations.